New Delhi. Aamir Khan, who is called Mr. Perfectionist of Bollywood, remains in the headlines every day. Recently, he surprised everyone with the news of his divorce with his second wife Kiran Rao. Both were together for the last 15 years but now both have announced divorce. However, even after the divorce, the two are seen together. At the same time, now a video of Aamir Khan is becoming quite viral on social media. In this video, he is seen with actress Kiara Advani.

Also read: Kangana Ranaut shared her bold photo, was seen taking a bath without clothes in the bathtub

Actually, Aamir Khan and Kiara Advani had recently reached an event. Kiara’s mask gets stuck in the event with Aamir Khan helping her. When it comes time to photograph both of them at the event, Aamir hangs his mask around his neck. But when Kiara tries to take off her mask, her mask gets stuck in her earrings. After which Aamir asks him if he needs help in removing the mask. To which Kiara says yes.

After which Aamir Khan starts helping Kiara to remove her mask. However, he is also unable to remove the mask. Then somehow Kiara’s mask comes out. Now this video of both is becoming quite viral on social media. This video has been shared by Bollywood’s famous photographer Viral Bhayani on his Instagram account. Different types of reactions are coming in this video of him. Commenting on a user, he wrote, ‘They are not thinking of arranging another marriage.’ One wrote, ‘Now to read the marriage from this.’ At the same time, another wrote, ‘Kiara is going to become Aamir Khan soon.’

Also read: When there was a lot of ruckus over Aishwarya Rai’s pregnancy, the actress was thrown out of the film 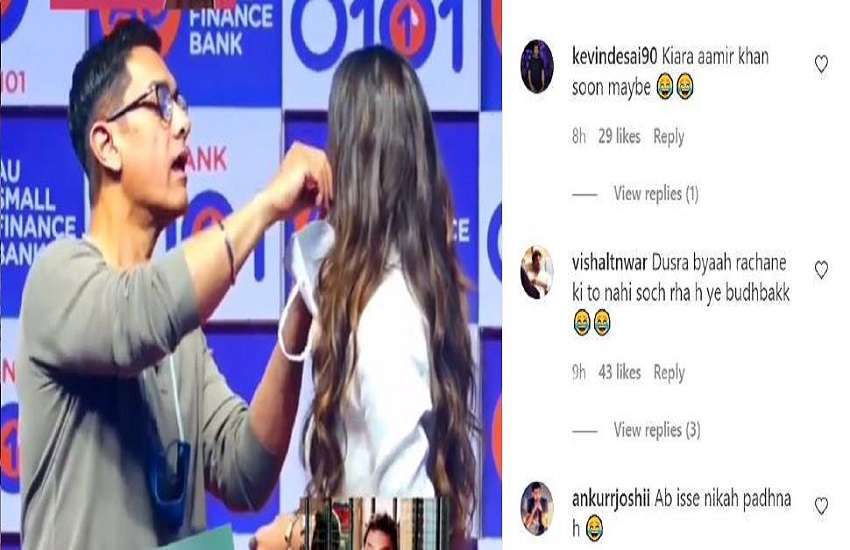 Talking about the work front, Kiara Advani’s film ‘Sher Shah’ has been released on August 12 on Amazon Prime Video. Siddharth Malhotra is in the lead role with her in this film. This film is a biopic of martyr Captain Vikram Batra. Kiara plays Vikram Batra’s girlfriend Dimple Cheema in the film. Apart from this, Kiara will be seen working in films like ‘Jug Jug Jio’, ‘Bhool Bhulaiya 2’ and ‘Mr Lele’. At the same time, Aamir Khan is going to be seen in the film ‘Lal Singh Chaddha’. Kiara is in the lead role with him in this film.