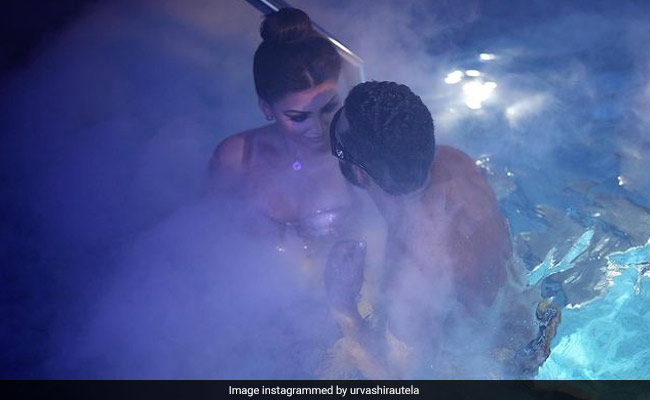 Urvashi Rautela has posted some pictures on her official Instagram account and in these pictures, famous Egyptian singer and actor Mohammad Ramadan is also seen with Urvashi. These pictures are taken from Ramadan’s famous song Versace Baby. Urvashi Rautela was also accompanied by Ramadan in this music video. Actually, 3 months have been completed for the release of the music video, so Urvashi has shared the stills of the video on her Insta page. Urvashi has written ‘Happy 3 Months’ in her caption with #VERSACEBABY.

Versace Baby is Ramadan’s superhit song, which has got more than 20 million views on YouTube in just 3 months. Urvashi Rautela’s glamorous style in this music video was worth watching, which was also well-liked by her fans. In the pictures posted by Urvashi, she can be seen in the pool with Mohammed Ramadan. On the completion of 3 months of the song, fans are also congratulating Urvashi by commenting.

Urvashi Rautela often keeps inspiring fans by sharing her work out videos on social media. Her fans like these videos very much and fiercely present the actress. In such a situation, now the name of a very famous personality has also been added to Urvashi’s fan list. The world famous Bear Grylls is also a fan of Urvashi’s work out videos for the show ‘Man Vs Wild’ on Discovery Channel. Urvashi recently shared a workout video on her Insta page, on which Bear Grylls wrote, ‘And never give up’. It is evident from this comment that Bear Grylls has also been impressed by Urvashi’s intense work out.