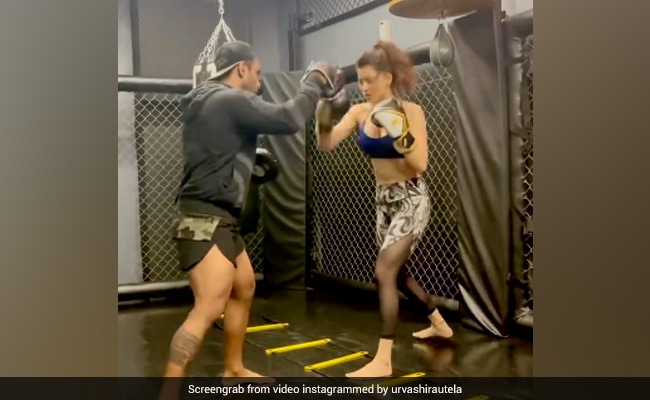 Urvashi Rautela is now seen in the avatar of a boxing girl. Urvashi has shared a video on Instagram with the caption ‘TO BE A GREAT CHAMPION YOU MUST FIRST BELIEVE YOU ARE THE BEST’. By watching this video, it can be understood that Urvashi is serious about her fitness. Millions of views have come so far on this great video of Urvashi Rautela. You can also watch this video of fitness freak Urvashi, in which she is seen doing tremendous boxing training.

‘Now you will get gold in boxing’
‘India is sure to get a gold medal in the next Olympics.’ We are not saying this, but the fans of actress Urvashi Rautela are saying this. Urvashi, who has spread her style on screen, is boxing like a professional boxer in this video. Urvashi has showered punches and punches on her trainer. Trainers are also seen trying to avoid Urvashi’s punches. By the way, a lot of comments are coming on this video which is becoming increasingly viral on social media. But one comment is very special in which Urvashi’s fan has written – “Looks like aagi bar boxing gold sure” while another fan commented – “I should eat any number of punches from such a beautiful boxer.”

Is there any project based on boxing?
Urvashi’s agility is made in this video. Prior to this, Priyanka Chopra also did amazing boxing training for the film Mary Kom. Seeing Urvashi doing boxing training in this way, it is also in the minds of many fans that whether there is any film related to her separate project boxing.