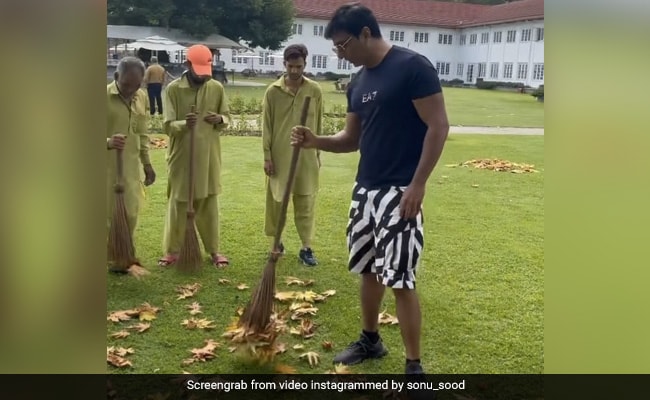 Bollywood’s famous actor Sonu Sood is very active on social media. His great videos keep going viral on the internet every day. His specialty is, he is always connected with the general public and keeps helping the needy people. At the same time, his funny videos are also often seen. Sometimes he is seen selling slippers on the footpath of Srinagar, and sometimes he is seen riding a bicycle. Now once again he has shared one such video with the fans, in which he is seen teaching a new technique of sweeping.

Sonu Sood has shared this latest video from his Instagram account. It can be seen in the video that Sonu Sood is seen teaching new techniques of sweeping to the sweepers. Sonu Sood says in the video that, the way you people sweep, it takes a lot of time. Put a broom in this way and see that the work will be done soon. At the same time, with this video, he has written in the caption ‘Once an Engineer always an Engineer. Learning new lessons’. Fans are very fond of this video of him. So far 1.1 million views have come on this video of him.

Sonu Sood has appeared in these films

Sonu Sood is undoubtedly a superhero for many people in real life, but in films he has played the role of a villain. She made her debut in 1991 with the Tamil film ‘Kaala Jhagar’ and followed it up with several Telugu films. In 2002, his Bollywood film ‘Shaheed-e-Azam’ came and he appeared in films like ‘Yuva’, ‘Aashiq Banaya Aapne (2005)’, ‘Jodha Akbar (2008)’ and ‘Dabangg (2010)’ in 2004. . At the same time, recently his new song ‘Saath Kya Nibhaoge’ has been released, which is being well-liked.