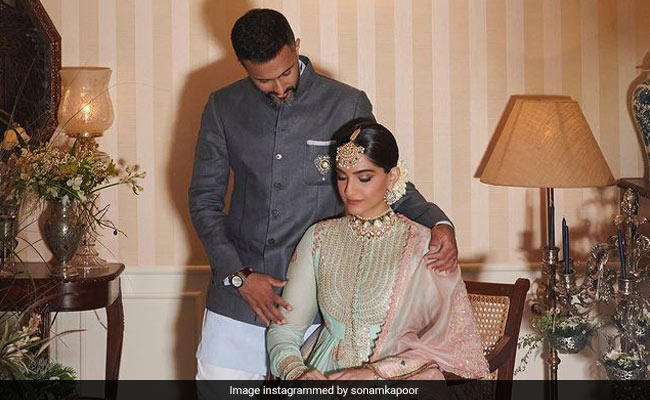 A few days after the wedding of sister Rhea Kapoor, today Sonam Kapoor has shared some of her pictures while updating her Instagram feed. These pictures have been taken during Rhea Kapoor’s wedding. Riya Kapoor married her friend Karan Boolani a few days ago. Rhea Kapoor and Karan Boolani knew each other for the last 12 years. Apart from the Kapoor family, some close friends and relatives also attended this wedding of Anil Kapoor’s beloved.

Sonam seen in unique look
In this wedding album shared by Sonam Kapoor, she is seen giving stunning poses. She is looking very beautiful in the pictures. The actress was wearing a pastel blue anarkali suit. Her husband Anand Ahuja was also seen with Sonam in the pictures. In the picture, Sonam is seen sitting on the couch, while husband Anand is standing behind her. The chemistry of the couple in the pictures is making a splash on social media. Sonam Kapoor shared the pictures with the hashtag #everydayphenomenal. Fans and celebs are very fond of these pictures and are giving their reactions.

marriage after 12 years date
Rhea Kapoor and Karan Boolani tied the knot after dating for a long period of 12 years and let us tell you that both of them met on the sets of the film ‘Aisha’, in which Sonam Kapoor was in the lead role. After this, the closeness between the two started increasing and finally on August 14, both of them got married.