So much money is kept as omen in the wedding envelopes of Bollywood stars, the megastar opened the secret

New Delhi. The marriage of a star in Bollywood is no less than a royal grandeur. They do not shy away from spending crores of rupees in their marriage. In their marriage, not only Bollywood stars, but also big celebrities from abroad are also involved, but one thing strikes in everyone’s mind that the stars spend as much in weddings. So the celebs arriving at their wedding must have arrived with envelopes. But these stars, who earn lakhs and crores, keep how much money in the envelope of omen as an omen. Let me tell you about it…

Read More:- Kareena Kapoor made a big disclosure about the name of younger son

Keeps so much money in the envelope of Shagun:

Everyone knows this thing that when a star gets married, then during that time small to big stars are involved in it. Keeping this in view, a ritual of shagun envelope has been made in Bollywood so that all the big and small stars do not face any problem. Actually, Amitabh Bachchan himself had revealed during an interview that it was a big problem for the guests arriving at Bollywood weddings to give the envelope of omen. Because when small artists used to reach the wedding of a big star, they are in a dilemma that how much money should be put in the envelope which is not against their respect, and does not become a laughing stock among the people. In view of all these things, the trend of 101 rupees for Shagun’s envelope started. 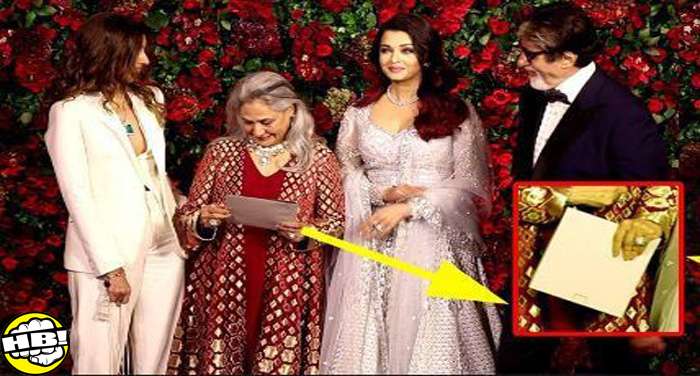 Amitabh Bachchan had revealed this about this Bollywood ritual during Kapil Sharma’s wedding. Now if any stars get married in Bollywood, then only Rs 101 is kept in the envelope as an omen. Now you must have also come to know that no matter how expensive a wedding is in Bollywood, but there is a trend of giving 101 rupees in the envelope of Shagun, which is very good for everyone.

Read More:- These famous Bollywood actresses gave birth to a child not by caesarean, but by normal delivery

Jaya does not like carrying a bouquet to the wedding:

Amitabh told that he likes to take a big bouquet with him for the couple at the wedding but Jaya Bachchan does not like it. Amitabh says that Jaya believes that the bouquets are thrown.