Protest In Jalalabad Against Removal Of Afghan Flag 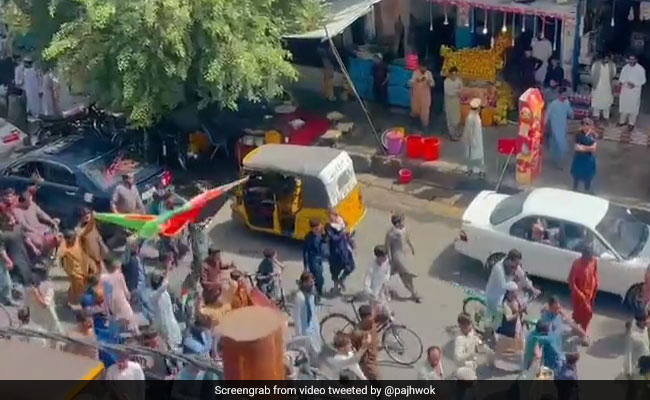 Taliban occupation of Afghanistan There are reports of violent reaction from the ‘new rulers of the country’ regarding the first protest against the. Local media reports that the Taliban opened fire at a protest, in which the national flag was also hoisted. There are reports of some people getting injured and possibly killed in this firing. The firing took place after talks began between the Taliban and former President Hamid Karzai and other leaders in Kabul amid speculation of a ‘unity government’.

After the capture of Kabul, the Taliban reminded of the ‘barbarism’ of Bamiyan, demolished the Hazara leader’s statue

The report said that during Wednesday’s protest in Jalalabad, people took down the Taliban flag and hoisted the national flag in red, green and black colors. Jalalabad was the last city to come under Taliban control before the capital, Kabul. A video tweeted by local news agency Pajwok Afghan News showed people crossing the road carrying the national flag. After this, the bullets start firing, there is firing from the machine gun. The demonstration stops and people start shouting slogans. Another video captioned, ‘Taliban fired at protesters in Jalalabad and beat up some video journalists.’

#Taliban Firing on protesters in Jalalabad city and beaten some video journalists. #Afghanidtanpic.twitter.com/AbM2JHg9I2

Protest in Jalalabad city in support of National flag.#Afghanistanpic.twitter.com/oxv3GL0hmS

‘We have to prove that Vietnam is not Afghanistan’: Ex-Vice President Saleh shouts

This was the first setback for the Taliban since the capture of the capital Kabul on Sunday. Earlier, the Taliban had also indicated a softening of its stance towards women. The Taliban indicated that women would not be forced to wear a full body-covering burqa. They just have to wear the hijab. Top Taliban leaders have indicated that there should be no obstruction in the education or employment of girls. Although the Taliban has indicated to adopt a soft stance this time, but people are not getting worried.

On Tuesday, the Taliban had appealed to all government employees to return to work, giving ‘general amnesty’. The statement issued by the Taliban said, ‘Amnesty is being announced for all … in such a situation you can start your routine life with full confidence. The nostalgia of the barbarisms like public flogging, stadium-crossings and stone-pelting during adultery during the U.S. rule are still fresh.