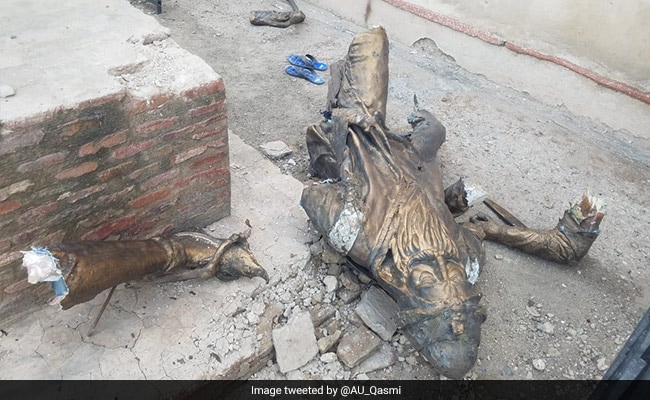 An activist of the banned Tehreek-e-Labbaik Pakistan (TLP) on Tuesday vandalized a nine-foot-tall bronze statue of the first Sikh ruler, Maharaja Ranjit Singh, at the Lahore Fort in Pakistan’s Punjab province. A video of this has gone viral on social media in which the accused is seen breaking the arm of the idol while raising slogans and bringing down the statue of Singh from the horse. It was also shown in the video that during this time another person comes and stops the person who damages the statue.

Facebook banned Taliban, said – it is a terrorist organization under US law

The newspaper ‘The Express Tribune’ reported that the TLP worker has been arrested by the Punjab Police. The Lahore Fort administration said that strict action would be taken against the accused. Reacting to the incident, Information Minister Fawad Chaudhry said in a tweet that such “illiterates are really dangerous to Pakistan’s international image”.

Special Assistant to Prime Minister Imran Khan on Political Communication Dr Shahbaz Gill said that immediate action will be taken against the accused. The newspaper quoted Gill as saying, “These are symptoms of a sick mentality. This is an attempt to undermine Pakistan’s assessment.” This statue of the Sikh ruler Maharaja Ranjit Singh was nine feet high. In this, he is shown in full Sikh attire, sitting on a horse with a sword in his hand. The statue was unveiled in June 2019.

China hopes, ‘Taliban will faithfully fulfill its commitments in Afghanistan, will not keep ties with terrorist organizations’

This is not the first time the statue has been targeted. Murthy’s arm was broken in Lahore last year. According to ‘Geo News’, it was damaged by two youths in August 2019. Maharaja Ranjit Singh was the founder of the Sikh Empire, which ruled the northwestern Indian subcontinent in the first half of the 19th century.