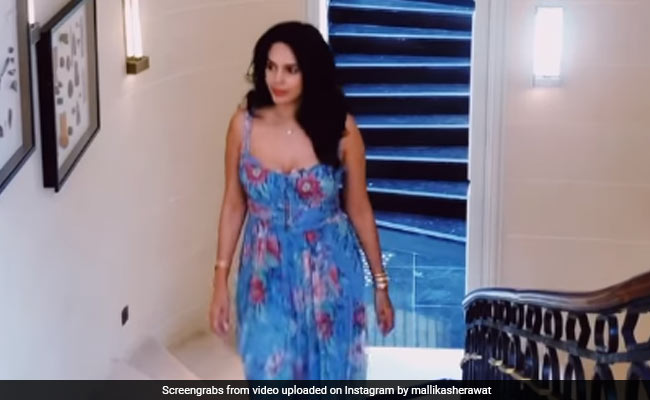 Actress Mallika Sherawat, known for her hot and bold style, is currently enjoying a vacation in Paris, the capital of France. Mallika shares many photos and videos on Instagram for her fans from here. Now she has shared a video from the French building in which she is seen climbing the spiral staircase and smiling looking at the paintings on the walls.

In the video shared by Mallika Sherawat, she is seen wearing a blue dress. Like always, Mallika is looking hot and stunning in this dress too. The creativity of the architect is clearly visible in this video and the paintings which are on the walls are looking very unique in themselves. It can be seen in the video that after admiring the paintings, Mallika is looking at the outside view by opening the window. Fans are also very fond of this video of Mallika. Earlier, he was seen walking the ramp in the streets of Paris. These days Mallika is enjoying her vacation full-on in Paris and is also sharing a lot of her pictures through social media. She is looking very gorgeous in these pictures.

Let us tell you that in all the films that Mallika Sherawat has done, she has appeared in a very hot look. Mallika made her debut in 2003 with the film Murder opposite Emraan Hashmi. In which his kissing scene with Emraan Hashmi was very much discussed. Talking about her film in an interview, Mallika Sherawat said that she had stopped getting good work after the film Murder. Mallika has worked in Bollywood as well as Hollywood. Mallika’s real name is Reema Lamba.