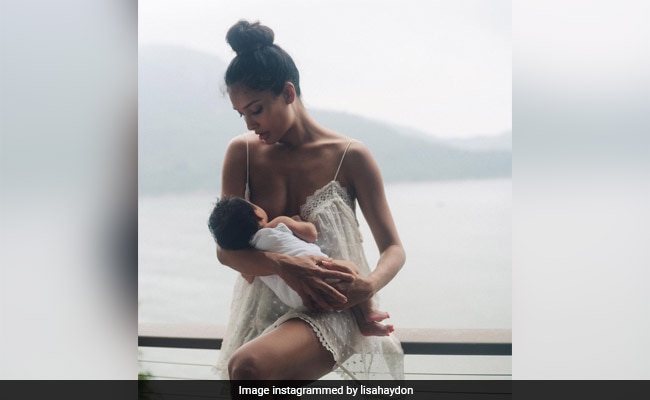 Lisa Haydon, who has appeared in few Bollywood films, is very fit and glamorous even after becoming a mother. Lisa surprises people with her style and look. Lisa has appeared in some famous Bollywood films like ‘Queen’, ‘Ae Dil Hai Mushkil’ and ‘Shaukeen’. All Lisa’s films have also performed well at the box office. Recently, the actress has become a mother for the third time and she has named her daughter Lara.

Lisa Haydon has recently shared some of her pictures while giving breast feed to her daughter, which are becoming very viral on social media. In these pictures, Lisa can be seen breastfeeding while standing in the balcony holding her daughter. Sharing the pictures, she captioned, “Was it just World Breastfeeding Week? In honor of this special week, Lara would like to thank everyone who has given her a place at the table.” So far more than 1 lakh 70 thousand likes have come on this post of Lisa.

Along with fans, comments of Bollywood actresses are also being seen on the pictures of Lisa Haydon. Commenting on the post, Evelyn Sharma wrote, ‘aawww Little Lara. How beautiful is this. Well done Lisa! A powerful mom. On the other hand, Nargis Fakhri has made a heart emoji on the post. Overall, these pictures of the actress have won the hearts of the people.