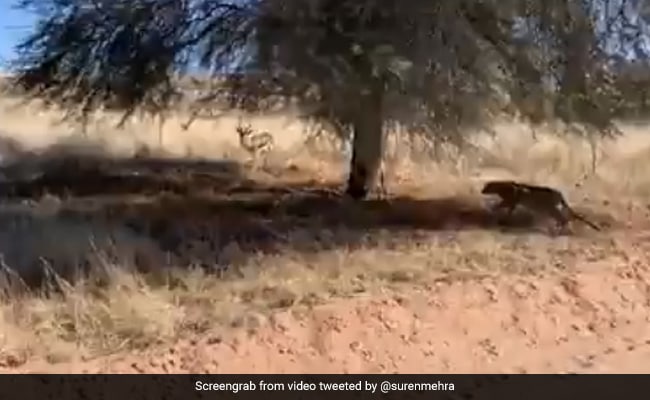 Leopard hiding behind the tree had an eye on the deer, suddenly attacked as soon as he got the chance

Hunting of animals is common in the forest. For their food, large animals often make small animals their prey and satisfy their hunger. Lions, tigers and leopards mainly hunt animals in the forest. In such a situation, the deer are in great danger from such dangerous animals and those poor people always roam in fear in the forest. A video is going viral on social media, in which a leopard cleverly made a deer its prey. You too will be shocked after watching this video.

Life in #wilderness is full of challenges and uncertainties..
Both for Prey and Predator..#JungleLife@susantananda3
VC:SM pic.twitter.com/AMajUqmPzI

This video has been shared by IFS officer Surender Mehra on social media. Along with the video, he wrote in the caption, Life in the jungle is full of challenges and uncertainties.. for both hunting and hunter… The leopard is crawling on the ground and moving towards it because of not being able to see from the deer. After walking some distance, the leopard hides behind the tree. As soon as the deer bends its neck down, the leopard suddenly attacks the deer.

This video will shock anyone’s heart to watch. This video is becoming quite viral on social media. This video has been viewed more than 18 thousand times so far. People are giving their reactions on the video. One user wrote – Bad day for the deer. Another wrote – Only a leopard can do such a hunt.