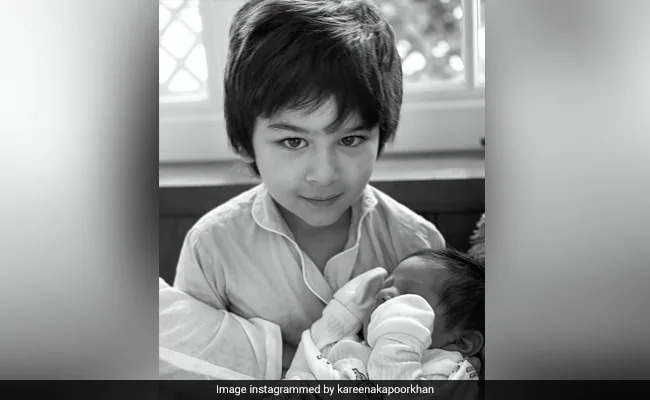 Kareena Kapoor reveals how Taimur and Jeh’s relationship is

Kareena Kapoor has become a great actress as well as a model and now an author. Recently she has launched her book ‘Kareena Kapoor Khan Pregnancy Bible’. In this book, he has shared many of his experiences. During a conversation with NayaTez about Pregnancy Bible: The Ultimate Manual for Moms-to-Be, Kareena shared Taimur Ali Khan’s reaction to Jehangir after his birth. Let us tell that Kareena Kapoor became a mother for the second time in February and she says on this that ‘Ever since I came to know about my second pregnancy, Saif and I were a little worried, because if a new guest would be added to the house, then people would be happy. Love will be more for him. We thought that Taimur should not get jealous after seeing all this. It is common for this to happen because Taimur is also young, he is only 4 years old.

Kareena Kapoor says that after the birth of Jeh, the relationship between the two was quite amazing. Taimur treated Jeh like Jeh’s elder brother Jeh was getting positive elder brother’s wives. Not only this, Kareena says that when Taimur’s friends come to the house, Taimur asks his friends, ‘Would you like to see your younger brother?’ After which they all greet him.

Kareena Kapoor told NayaTez that sometimes we even tease Taimur that Saif and you should go on vacation. In response to which Taimur says “No-no not without Jeh” after which we say that okay then both of us are going then, even after this Taimur says “No-no without Jeh”. Taimur never felt insecure, I think we both have balanced it together.

On the question of not sharing Jeh’s picture, Kareena Kapoor says that it was our decision not to share Jeh’s picture on social media because we want to keep her from pressure to stay in limelight. However, very interesting pictures of Jeh will definitely be seen in the book. Let us tell you that on Mother’s Day, while sharing this picture, she got to see a very beautiful picture of both of them, she captioned “Hope for my better tomorrow”.

Regarding the pictures of the son, she further says that in 2016 when Taimur was born. Then there were different reactions of people regarding his name and picture. So this time we are taking a little more time. Talking to NayaTez, Kareena said that we should allow children to be like children. I don’t think people should be interested in him. We should give them their space to grow. Not that there should be pressure on them to come in limelight. Looking at what happened during Timur’s time, we took a conscious decision in the time of Jeh.