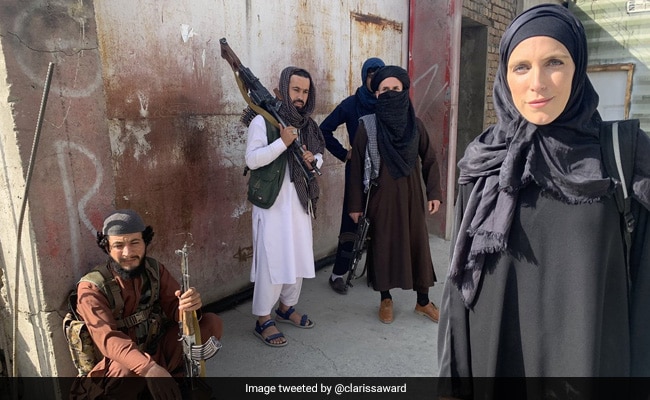 The Taliban have taken over Afghanistan. The most concern is being expressed for women and children that the condition of women will worsen under the Taliban rule. They will not be allowed to go out and they will not be able to do anything independently, because the stories of the Taliban rule from years ago are still alive in the minds of women. Well, when the horrific pictures of Kabul airport were going viral on social media, at the same time the picture of Clarissa Ward, an American TV reporter, was also going viral, in which it was being said that this woman journalist had to change herself in 24 hours. Earlier she could roam without hijab, but now she is doing her work wearing a hijab. It was also said that the condition of women can be gauged from the fact that how bad the time is going to be for them. Think how much fear is there.

Well now this TV reporter himself has come and given a statement. Taking both the pictures going viral on Twitter, he wrote that it has been misrepresented by making it a meme. The first photo is of a private compound and the second is of Taliban-ruled Kabul. I used to wear a head scarf while reporting in Kabul in the past, although my head was not fully covered and I was not in obaya attire. He admitted that there has been a change, but it is not of the level as shown in the picture.

This meme is inaccurate. The top photo is inside a private compound. The bottom is on the streets of Taliban held Kabul. I always wore a head scarf on the street in Kabul previously, though not w/ hair fully covered and abbaya. So there is a difference but not quite this stark. pic.twitter.com/BmIRFFSdSE

Let us tell you that Clarissa Ward has been reporting on war-torn countries for a long time. On Monday too, she herself posted a picture from her Twitter handle in which she is seen wearing a hijab with Taliban terrorists. Many users also wrote on this picture that if you do not wear hijab, then your life can be in trouble. However, some people were also seen saying that those who are concerned about the condition of women in the Taliban regime, see how comfortably women reporters are reporting to the Taliban. At the same time, some users also linked their reporting wearing the hijab to the slavery of the Taliban. Most were seen praising his courage that when the women of Afghanistan are inside the house, he went out and introduced the people to the situation in Kabul.

On the other hand, the Taliban also seems to be trying to show their soft stance. A Taliban spokesman said today that women would be allowed to leave the house alone. They will also have access to education and work. They just have to wear hijab. At the same time, earlier the Taliban had made a rule that women would not go out without taking a man along. Wearing hijab was compulsory. Not only this, they were not even allowed to study and work outside.