This campaign, started to keep the nature clean and to increase the pride of its tricolor, also got the support of Uttar Pradesh Chief Minister Yogi Adityanath. Yogi Adityanath from his official Koo account appealed to his supporters and the general public to never use the plastic tricolor. Taking part in this campaign, Yogi Adityanath wrote, “Our national flag, a symbol of unity, integrity and sovereignty of the country, is the pride of all Indians. Come, let us all take an oath to never use plastic tricolor in the interest of the tricolor, protect the environment and in the interest of the nation. Hail India!”

By writing another Koo, Yogi Adityanath said that, “It is good to stop using plastic for the protection of our beautiful Vasudha, nurturer nature and environment. Never use plastic tricolor on Independence Day. Let us build a ‘plastic free’ new India.”

Taking part in this campaign, Madhya Pradesh Chief Minister Shivraj Singh Chouhan appealed to his official Koo account, “On 75th #IndependenceDay, I request all the brothers and sisters and youth of the state to take pride in the tricolor made of paper or cloth. And fly with pride. Come, let us all take an oath on this holy occasion of Independence Day to make India a clean and proud India.

Punjab Chief Minister Amarinder Singh’s office also participated in this campaign on Koo App and wrote from his official account that, “Do not use plastic tricolor on 75th Independence Day and make the country clean”. 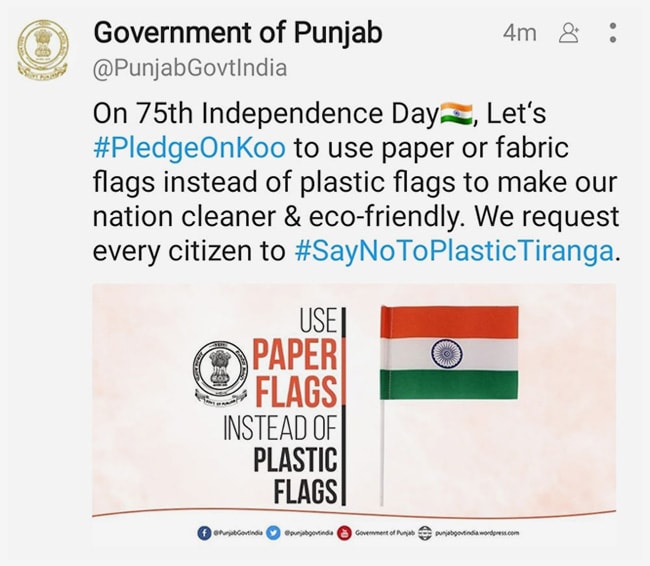 Himachal Pradesh Chief Minister Jai Ram Thakur also spoke about the ill-effects of plastic tricolor on the environment and wrote, “Don’t insult the pride of the tricolor with plastic. On this Independence Day, I take an oath that I will not use plastic tricolor and will also request the citizens of my state to take this oath and increase the honor of the tricolor.

Union Minister Arjun Munda also participated in this campaign and wrote, “Indiscriminate use of plastic has polluted our rivers and country in the last few years. Therefore, on this Independence Day, I request you to take an oath with me that you will not use the plastic tricolor flag and will enhance the pride of the tricolor. Jai Hind.”

Former Chhattisgarh Chief Minister Dr. Raman Singh also appealed to the people from his Koo account and wrote, “The protection of the environment is our security! On 15th August, on the festival of independence, let us all take a pledge to get freedom from plastic. Do not use plastic tricolor on this holy day, nor inspire anyone. This small effort will gradually bring awareness and we will be able to make a plastic free nation to protect the environment.

Ravi Kumar Dahiya, who performed brilliantly in the Olympics and won India a silver medal in the Tokyo Olympics this time, also took oath on Koo and wrote that we can make the world more beautiful without using plastic. Abhinav Bindra, who won India’s first gold medal in the Olympics in 2008, also joined this campaign on Koo and told the people, ‘This Independence Day, let us all take an oath that we will not use plastic tricolor and keep our national flag. Will give full respect to Deepak Punia, who won the country a bronze medal in freestyle wrestling at the Tokyo Olympics this year, has also joined Koo. He also appealed to the people and wrote that, “If you cannot recycle an item and use it again, then it is better that you stop using it. Say no to the plastic tricolor.”