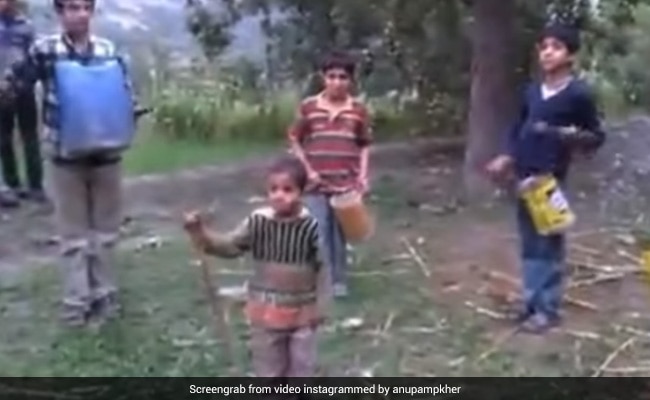 15 August i.e. Independence Day has passed just a few days ago. On this day every citizen of India expresses the spirit of patriotism in his own way. In cities, it has become a fashion to show patriotism by putting up badges or flags. But in the villages, different colors of this day are still visible. Some colors that often surprise. Film actor Anupam Kher has also shared a similar post on Instagram, which people are shocked to see, and are not tired of praising.

What’s special about the post?
In this Insta post of Anupam Kher, some village children are seen, who are playing music on instruments made of jugaad. Some have a tin drum in their hand and some have a flute-like bamboo. Children, come children with these jugaad instruments, show you the tableau playing the song of Hindustan. A small child is standing in the middle. Seeing whose gesture you will also become his fan. Holding a bamboo almost as tall as his height, the child is walking with full attitude. Seeing his style, even Anupam Kher himself could not stop himself from praising him. He captioned the video that in a village in India, children are playing military tunes with tin drums. His sincerity is commendable. Especially the youngest child. In the end, Anupam writes that the real power lies in the heart. Salute to the spirit of these children.

children received praise
Many people have liked this video of Anupam Kher. By the time the news was written, 1 lakh 67 thousand 548 people had watched this video, and were also praising it wholeheartedly. Some Insta users even claimed that this video is from their village. Let us tell you that Anupam Kher is very active on social media. He has 4.5 million followers on this platform.