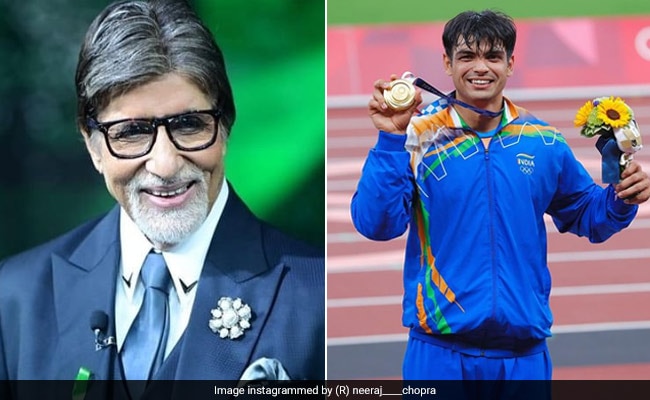 Neeraj Chopra, who won the gold medal in Javeline Throw at the Tokyo Olympics, is in constant headlines. On winning the gold medal, the whole country is congratulating him in his own style. Bollywood celebs are also celebrating his victory fiercely. Salman Khan and Randeep Hooda also congratulated Neeraj. In such a situation, how can Big B of Bollywood i.e. Amitabh Bachchan be left behind. Amitabh Bachchan has also tweeted his best wishes for him in a special way. Which is becoming fiercely viral on social media at this time.

T 3993 – One chest widened 103 crore chest
And the Indian Olympic Team, around the world, raised the flag of the country! ? pic.twitter.com/wmq1ZJXadn

Amitabh Bachchan has tweeted about Neeraj Chopra. In which he has congratulated Neeraj for winning the gold medal in his different style. He has written ‘T 3993 – One chest, 103 crore chests widened and the Indian Olympic team, around the world, raised the flag of the country’. Along with this, Amitabh has also shared an animated video, in which Neeraj is seen throwing Javeline. His tweet is becoming fiercely viral on social media. Fans are very fond of congratulating him in this style.

Neeraj Chopra won the final with such ease that none of the 11 other contestants could come close to his second best throw of 87.03m. Neeraj Chopra also won gold medals in Asian Games and Commonwealth Games in 2018. He said that he will now focus his attention on winning the title in the World Athletics Championships. In an exclusive conversation with NayaTez, Chopra said that he will give his best for the next World Championship, which is to be held in Eugene US next year.