Ajay Devgan’s ‘Bhuj: The Pride of India’ was praised by the audience, praised on Twitter

New Delhi: The film ‘Bhuj: The Pride of India’ is based on the Indo-Pak war of 1971. This film is being streamed on ‘Disney + Hotstar’. Ajay Devgn, Sanjay Dutt, Nora Fatehi and Sonakshi Sinha have played special roles in the film. Netizens are appreciating the film on social media. The audience is not liking the film only because of the patriotic dialogues and action. There is a lot in the film, which is enticing him.

In the film, along with the bravery of Indian soldiers, the courage of 300 villagers has been beautifully portrayed on the screen. The audience was eagerly waiting for the film ‘Bhuj: The Pride of India’ starring Ajay Devgan, Sanjay Dutt, Nora Fatehi, Sonakshi Sinha. Today, from August 13, the streaming of this film has started on the OTT platform Disney + Hostar. In the film, Ajay played the role of Squadron Leader Vijay Karnik, who was in charge of the Bhuj airbase during the 1971 war. This airbase was serving the army even in the midst of heavy bombardment by Pakistan. Soon after the release of the film, reactions started coming on social media about it. Netizens have praised the actors and described their performance as excellent. 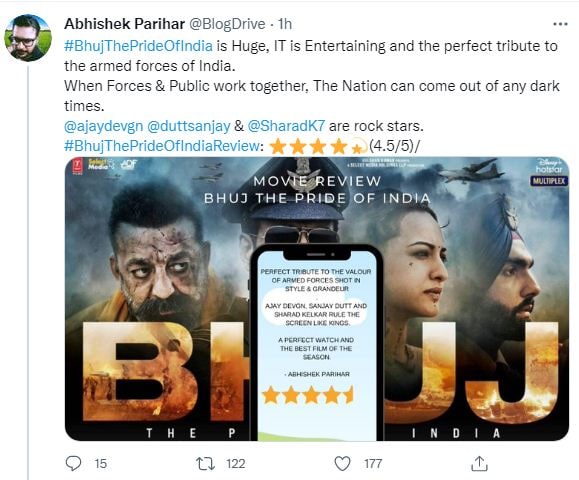 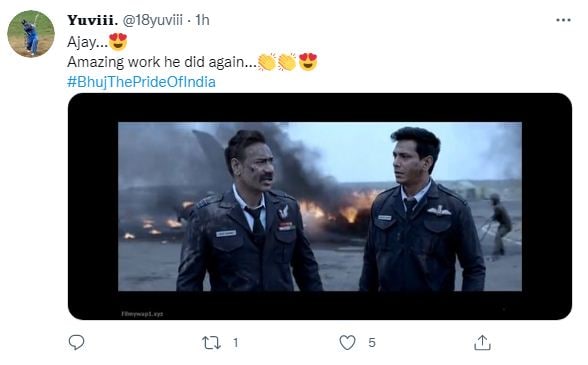 The audience has liked the bravery of the Indian soldiers as well as the 300 villagers on screen. Praising the film, trade analyst Taran Adarsh ​​tweeted. He has described the film as very exciting and has given it three and a half stars. He has praised the visuals of the film. Ajay Devgan has been seen again in his superb form. Many Twitter users have commented about the film. One user writes, ‘Congratulations to Ajay Devgan sir and his team and fans of Bhuj.’ Another user writes, ‘Ajay…he has done an amazing job again.’